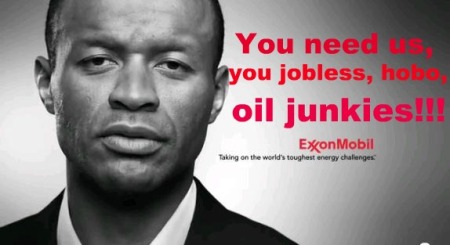 And Alberta, Canada is a moral shit hole full of mean people.  This particular ad reminds me of an opiate-induced version of that moment in V for Vendetta when the prime minister goes ape shit sensing his loss of power is imminent.   Artis is telling everyone “why we need them!”

A Cornell University study says the Keystone Pipeline kills more jobs than it creates.  Now some jobs would be created for Canadians…which is fine, but don’t LIE and act like this is boon for America’s unemployed.  TransCanada admits ONLY 20 FUCKING FULLTIME permanent jobs will be created in the U.S.   So, fuck you, Artis.

And I wouldn’t expect Exxon to say this, but tar sands are an absolutely filthy source of petroleum.

Artis is only half as disgusting as Erik Oswald: 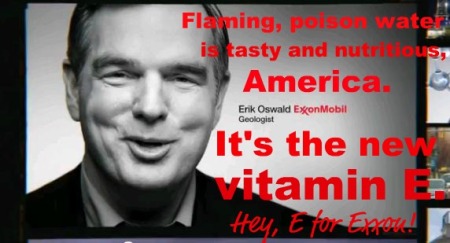 Erik’s joker face could easily be  a mugshot for a pedophile teacher.  He doesn’t lie as well as Artis.  Erik’s eyes get all shifty in his ad for fracking.

Shut up, NOAA!  I’m still disgusted with you and your capitulation to BP.  Drink some Corexit and die.

She cannot shut up about...

Buy My Shit for Christmas or Whatever!!!

Yall Are Diggin’ This…